I'm aware that it has been a while since the last time we gave news to you. Be reassured, the project is moving on and here we are to give you some news.

Today, I am very proud to announce that we have managed to release the alpha version of PlayOnLinux and PlayOnMac 5 (aka Phoenicis). I would like to give my special thanks to those who have continued the work I started few years ago: @plata and @madoar, and many others.

In one word: everything. First, the interface has been completely redesigned: 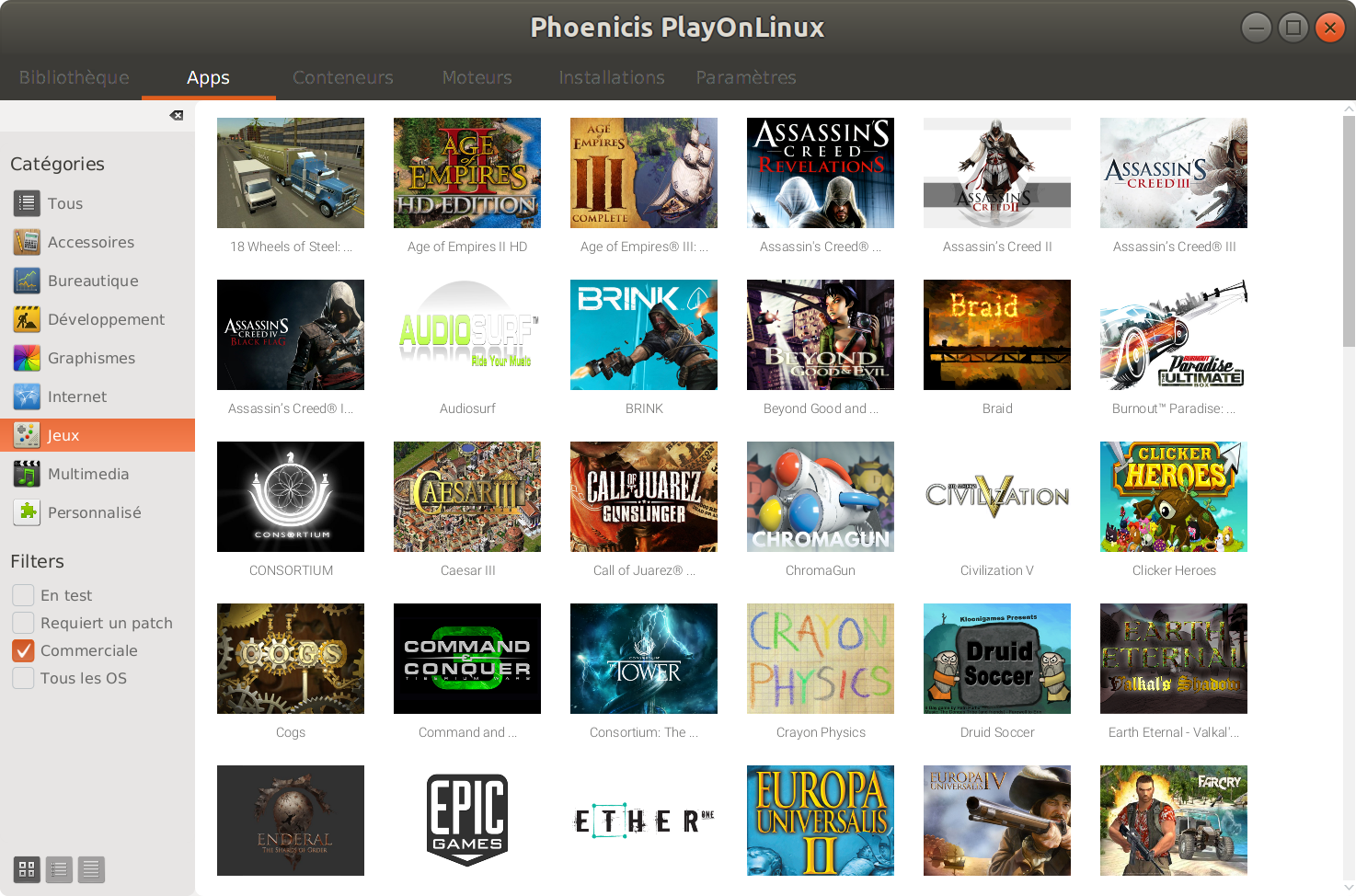 Phoenicis is a completely rewritten piece of software that aims to bring you all the features of PlayOnLinux 3 and 4 (a.k.a Arietis) with new principles:

This alpha version respects theses principles and supports about 135 games and many other apps. You can see the whole list here: https://www.phoenicis.org/apps

We need to go further and find a way to gather your feedback. This is the reason why we are releasing an alpha-test version of Phoencis.

The project is far from being finished. Our next steps are to develop a strong Wine build platform using modern virtualization and/or containerization solutions. Then, we will make a new website (hosted at: http://www.phoenicis.org) so that we can continue giving you the best support we can.

Feel free to send feedbacks and see you soon

Some news for your scripts

In these early 2018, a new feature is available for all scriptwriters that should make user experience more enoyable. Until today, the settings for the wine virtual desktop was hard coded in the script. Two users have therefore proposed a new script allowing scriptwriters to ask the user for these settings.

This script is currently in testing to ensure that it works properly but will be validated soon. We invite scriptwriters to replace Set_Desktop by a call to the new script like that :

In addition, some of you may have experienced problems with the Microsoft font installation. The script has been updated and the problem should be fixed. If you've used it recently and have problems with the fonts, you can try to reinstall them via the configuration menu ;)

We wish you a Merry Christmas and a Happy New Year!

We are aware that we did not give a lot of news this year and we are verry sorry for that. However, we are coming in 2017 with a lot of new stuff.

We are proud to annouce that we have a first working version of PlayOnLinux 5 with a strong architecture.  You'll hear about this very soon. To keep you patienting, here is a small video:

PlayOnLinux and PlayOnMac 4.2.10 are released

PlayOnLinux and PlayOnMac 4.2.10 are now released. Here is the changelog:

Development has been picking up steam lately, and as such, we are proud to release PlayOnLinux & PlayOnMac 4.2.8. You can download it here:

Here is the changelog for this release:

Hi all, we are proud to announce the 4.2.7 release of PlayOnLinux/PlayOnMac!

Among the visible changes, first a regression fix: "Install non-listed applications" should now be visible all the time, even while the list of install scripts is being updated: 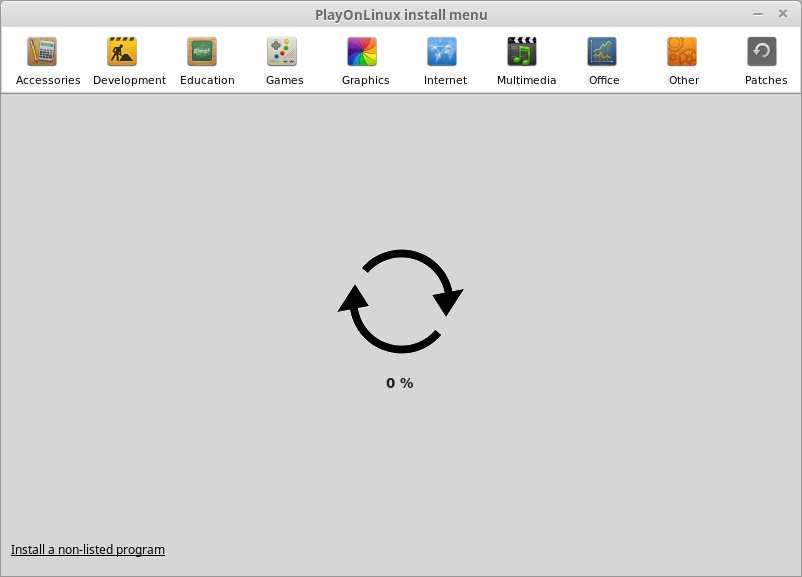 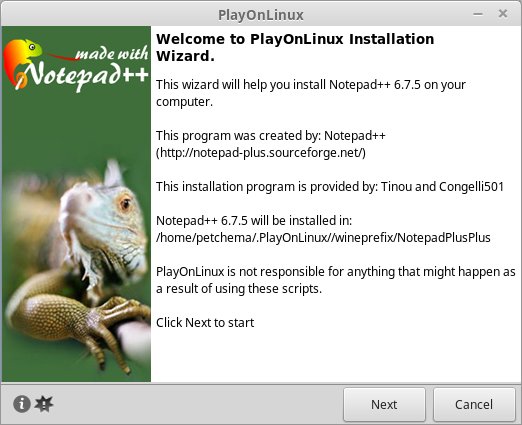 PlayOnLinux would display important informations at the beginning of the first installation, but not show them again so you don't have to click thru them with each installation. It will now display those informations until you click "Don't remember me" (after actually reading the messages of course!). This feature is also available for your own install scripts, as the new statement POL_SetupWindow_notice: 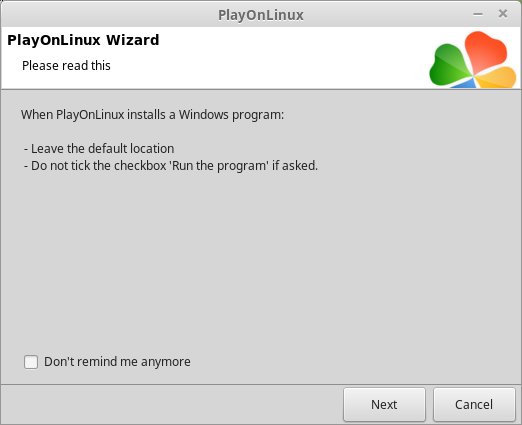 The Wine versions manager display has been changed to display a small lock (and bold text) for versions currently in use by some virtual drives, so you can more easily remove the versions that are no longer used:

Beside that, this version also contains its share of bugfixes and code cleanups, so here's the full changelog:

* Detect and abort scripts when trying to run 64bit programs with 32bit Wine
* POL_DetectVideoCards: list VGA compatible controllers and 3D controllers (#5012)
* Add support for several other value types than REG_SZ to registry
updating statements (#5013)
* POL_Wine_SelectPrefix: abort if no prefix name is provided
* Sort install scripts lists case insensitively (iTunes)
* Fix "hash-bang" line in shortcuts so they're actually executable
* Deprecate the usage of $REPERTOIRE in PlayOnLinux own code
* Translate remaining french comments and identifiers in Bash code
* Improve POL_Wine_PrefixDelete to remove ancillary resources (shortcuts, icons,...)
* Wine versions manager: attributes tell apart used versions instead of
unused versions; Add an extra warning when about to remove a version in use
* Avoid Python detection loops
* Display wx version found
* Fix Settings > Internet menu (#4989, thanks to rupert)
* Workaround for Wine bug #37575 (#5023)
* Improve find_binary function and make it public as POL_System_find_file
* Add support for .lnk, .bat and .cmd files to POL_Shortcut and POL_SetupWindow_shortcut_creator
* Added an icon to open the debugger from the installation wizard when
POL_Debug_Init has been called (#4948)
* Implement POL_SetupWindow_notice to display important messages, but
allow the user to acknowledge them once and for all ("Don't remind me") (#2036)
* POL_OpenShell (Configure > Misc > Open a shell) bug fixes
* Add a warning when OpenGL autotests are missing (user support)
* Make sure "Install non-listed application" link is always visible in
install window
* POL_SetupWindow_cdrom: don't suggest "*" when no CDROM has been found
* Remove use of remaining os.system() calls (less overhead, less quoting nightmare)
* Use os.kill() instead of shell command
* Use of "exec" to avoid some useless extra Bash processes
* polconfigurator interface cleanup (no risk of translation breakage)

We now have Wine-Staging WineBuilds in our repository, available to use through PlayOnLinux and PlayOnMac. We have been working extensively with a few members of the Wine-Staging team over the last couple of weeks to help make this possible.

Please, feel free to test out these new versions from the Manage Wine Versions menu in POL/POM, and please report issues that you have with the builds to our team. They have a suffix of "-staging" in the names of the Wine versions ("1.7.39-staging", etc.).

So, our wiki has now been fully deployed, and is even integrated into our navigation menu. The Documentation link has been replaced with Wiki, as well as having it now direct you to the official wiki. There is far, far more information available than every before, and new info being added all of the time.

We encourage every user to stop by and take a look at the docs again, and check back frequently. We will be adding new tips, tricks, guides, and more as much as we can. Enjoy!

Hello, Linux and Mac community! We are proud to announce the release of the newest version of PlayOnLinux and PlayOnMac. It can be downloaded here:

Thanks to everyone who submitted bugs and posted in the forums to help make each release better than the last.

The changelog for this 4.2.6 can be found below:

We have also started an official Wiki page that is going to be filled to the brim with Information regarding POL/POM, Wine, scripting, and more. As of now, all current documentation has been moved to the new wiki. It is located here:

Be sure to check back there often, as there will we new info added as often as we can.

The installer for SimCity 4 Deluxe has been updated to use the newest version of Wine, as well as having added Steam support for newer purchasers of this fantastic, old-school game. 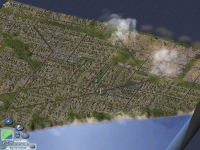 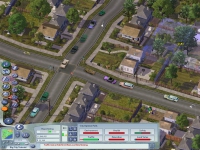 Check it out here:
http://www.playonmac.com/en/app-311.html