In a little period, there was a lot of movements in the world of GNU/Linux display drivers. Let's start with NVIDIA:

- Added support for GeForce 8800 GT, GeForce 8800 GTS 512 and GeForce 8800M.
- Improved modesetting support and fixed stability problems on Quadro/GeForce 8 series GPUs.
- Improved performances for all the GeForce 8 cards.
- Fixed bugs with XRender, the X.Org extension.
- Better setting management for the HDMI, the DVI and the HDTV.
- For workstation users, it's interesting to note that the CUDA driver (Compute Unified Device Architecture) is now directly integrate in the executable file.
- And still more changes ...

To see the complete change changelog, go on the NVIDIA website's official page.

We begin with the brand new version of the closed-source driver, the AMD Catalyst 7.12. It brings mainly bug fixes like:

But it brings some innovations too, such as:


Finnaly, let's finish with the open-source ATI driver's 6.7.197 version. Since the 6.7.197 version, over than three dozens of changes were made. Here are the major ones:

You can see the complete changelog on the X.Org mailing-list.

The Balanced Annihilation game has been updated to 5.91 version. It's a mod (understand a modification of an original game) of the multiplayer RTS (understand a real time strategy game) TASpring, itself having for goal to recreate the gaming experience of Total Annihilation in a free game. The story, taking place in a Science-fiction universe, could be summarized thus:
"Total Annihilation direct, in a far away futur, two enemy factions, the Core and the Arm, which clash in a thousand-year-old combat for the galaxy's domination.
In the beginning, the Core was an organization which aims to settle the largest possible number of planets, for the humanity's well-being. Howover, in order to free them from human being's limitations, they tried a massive transfer of brains in machines and caused a rebellion movement named the Arm.
After four milleniums of fights, the confrontation between the two organizations degenerated at the point to ruin the resources of all the galaxy after having destroyed million planets. At the game's begin, this war couldn't have any other exit than a complete annihilation of the opponent. That's with this minimalist argument a merciless fight starts."


This update brings an important number of changes:

- Added Defense Range V3.1, by verybadsoldier
- Added Healthbars widget by jK
- Added Customformations widget by jK
- Added unit_mex_upgrader.lua by BigHead
- Increased Juggernaut's Mass
- Decreased Sumo's range, this also effects MohoExploiter and Doomsday machine
- Nukes will no longer collide with Friendly units (so it wont go BOOM above your base, when it hits a fighter :P),
- Added an image needed for the buildbar widget.
- Fixed Rapier and Blade missile's
- Arm Destroyer slighty more DPS (7%)
- Nerfed Doomsday Armour 5% to 8%
- Consul begins building faster now, thanks Krogoth86
- Replaced Adv Fusion models with the CA models, Thanks Saktoth
- Added Some lights on some factory's a la CA.
- Added LUPS, which adds some effects to certain units, Many thanks go out to jK for making LUPS
- Necro and rector will leave a corpse now.
- Removed corpses which aren't needed.
- New set of Loadscreens
- Levithan/Serpent are Battle subs now
- Sharks/Piranha's are Sub Killers now
- Flagship Range Increased.
- Reduced Costs of Anti-Air ships
- And a lot of other changes.


You can download Balanced Annihilation 5.91,and see the complete changlog, by clicking on this button:

As he announced it on his website, Ryan Gordon, alias Icculus, the Epic Games studio's Linux specialist, the Linux server for Unreal tournament is available to download.
The game's client version isn't necessary to host UT 3 matches.
It's a 1.6 Gb executable binary package, build from 1.1 version of the game but it's compatible with all client versions.


You will find the md5sum and mirrors list at announce page's bottom:
http://icculus.org/news/news.php?id=4104

But, still no release date in view for the UT 3 client's Linux version.
Moreover, contradicting some rumors about the Linux client version delay, the Phoronix.com website teaches us that AGEIA, the society which sells well-named PhysiX physic acceleration cards, contradict any legal issues linked to their technologie. From now on, we can more probably speculate about a problem with GameSpy.
To return to AGEIA and their PhysiX, we can comfort ourselves by remembering us that AGEIA support Linux for their Software Development Kit (SDK) and even better: they planned to ship a Linux driver for their PhysiX PPU (PPU = Physics Processing Unit).

Currently, Ghostofkendo is the only newser. By the way I want to congratulate him. Indeed, he writes complete newses and then traduces them in English himself (because he is french). But, and I understand him very well, he don't always has time to manage everything alone. It's the reason for which we will recruit newsers.


What used to do a newser?

They could be more or less long and could cover various themes like:

The newser moderate: If necessary, he distribute sanctions to those who don't respect comment posting rules.

The newser has right to a nice little image, matching to the last PlayOnLinux's design

Newsers will have to write at least one news a week.

Newsers have to be able to write with a correct orthography.

Just send me a private message indicating your availabilities and your motivations.

We are looking for two or three newsers for the moment.

Thanks to Ghostofkendo for the translation

This evening, I will tell you more about a tool I started to develop for WorkOnLinux.


After using WorkOnLinux with miscellaneous softwares, I realized that Wine's interface was pretty unpleasant to use.

Why? Simply because we can't say that widgets are very esthetics.

So I created this little tool.

Here is its operation:

For the moment, the only existing theme is : Blue

A little screenshot is better than a long explanation 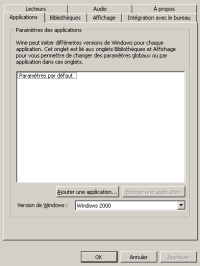 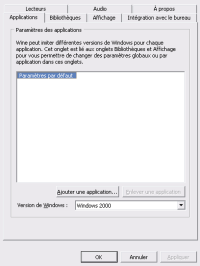 For next releases, I will add some themes or I will create a system that will allow members to post their themes.

I come here to announce a great news for web developers.

You are under Linux since years and you don't know if your website is correctly displayed by Safari? WorkOnLinux is here to save yourself!

Indeed, Safari is entirely compatible with WorkOnLinux, except a little unsolvable font bug. Not really annoying.

Another good news: he is supporting Flash Player without any problem.

Conclusion: Just click on the "update" button in your toolbar

Today is the release day of PlayOnLinux 2.0.4.
Here are improvements brought by this version:

Fixe for an annoying bug in LiveInstall with the CD


Before, the CD was doing something like "cd /home/tinou/.PlayOnLinux/wineprefix/game//home/tinou". It's finished

PlayOnLinux german translation (Thanks to AK-Palme)

Improvements in the french language (Thanks to bloom1)

The Phoronix.com website's team had done, this Sunday 09th December, for your greatest happiness, a benchmark of video performances of the last seven WINE's releases, i.e from WINE 0.9.44 to WINE 0.9.50.

To read this article, go HERE.

If you are interessed in my translation (in french) of this article (What? It's not forbidden to dream, isn't it?

), you can choose to read it on the POL's french website or to download the corresponding ODT file HERE.

PolScriptCreator - A great help for your scripts

I let you know that I started to create a tool to conceive your PlayOnLinux scripts the simply possible.

First of all, it's normal that everybody don't want to learn the bash language (

) , or to search everywhere in the website to find various commands in order to create your script. That's why I tought to them, and have begun to write this PlayOnLinux's Auxiliary

How will it help us?

This tool will work in several windows and it will list different PlayOnLinux's commands in these windows. Tanks to these intuitive windows, PolScriptCreator will allow you to enter all parameters you want and it will include the corresponding command in your script (magic! Isn't it?

Cool, when will it be released?

The project is yet in an advanced state since are only lacking the implementation of all existing commands and a window each one of them. And you can believe me, it's a lot of work, an long and very repetitive work.

I don't forecast any release date because I prefer to test PolScriptCreator, ask for staff's opinion and release a satisfying and functional beta. Thereafter, this version will be open to your comments and then a stable version will be released. Other version will be developed when POL's evolutions will require it (changes of commands or functionalities).

Who will conceive it?

Zoloom (me), and probably only me. Other staff's members being yet busy, I don't want to give them on more source of work. Moreover, it made part of my skills

I will be the maintenor for the next versions.

Which functionalities will be added?

Maybe a synthaxic coloration, and an assistant to create "pre-made" scripts. But I will no more tell you about it, you will have more details at the beta's release.

Here is a project of ambition which will increase the number of proposed, I hope so

Have a good day on PlayOnLinux.